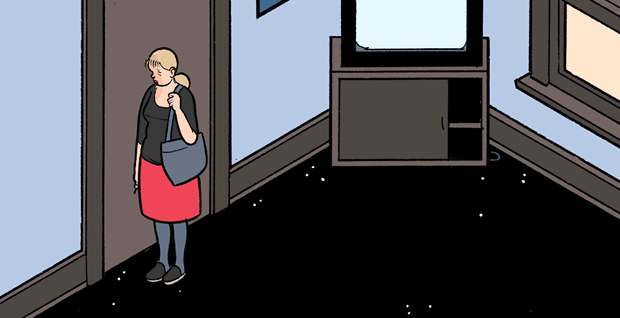 Our friends at McSweeney’s asked us to help with the development of the iPad-exclusive comic Touch Sensitive by cartoonist Chris Ware. It's available today for 99 cents as an in-app purchase inside the latest version of the McSweeney’s app. The app itself is now free and comes with a one-month subscription to the Small Chair, a weekly selection from all branches of the McSweeney’s family.

Here's what McSweeney’s says about it:

In the briefest of flirtations with non-corporeality in this, his first (and likely final) iPad-only comic strip, our otherwise normally corporeal cartoonist and former McSweeney’s guest-editor Chris Ware attempts to address how, in some relationships, the act of touching seems to shift over time from that of affection to aggression. Chock full of his trademark constipated drawings and strained, overwrought text, the reader will also be pleased not to afterwards find him- or herself laden with a pamphlet or book to discard the next time he or she changes apartments, homes or relationships; like the 99 cents that instantly vanishes from one’s bank account upon purchase, all 14 speedily-swipable digital “pages” with their tucked-away animations and mildly disorienting transitions may easily be wiped from one’s computer’s memory with precisely the opposite degree of difficulty which one simply cannot forget that night of screamed obscenities at one’s (now ex-) girl- or boyfriend. (Please note, however, that all 99 cents and the rights attendant thereto remain, in perpetuity, the sole property of McSweeney’s and its satellite concerns.) Touch Sensitive is a comic and unlike the other e-books in this store. It was crafted specifically for the McSweeney’s app and is available only in iPad format.