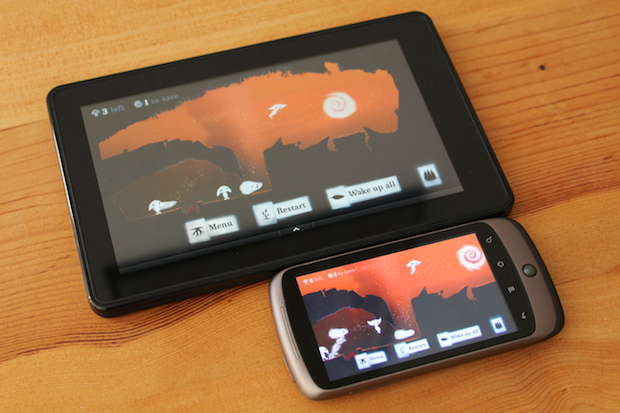 Spirits running on Kindle Fire and Nexus One

Today Spirits goes truly multiplatform and comes to Windows, Mac, Linux and Android as part of the Humble Bundle for Android 3, alongside with indie classics Fieldrunners, Bit.trip Beat, Uplink and SpaceChem.

The game has been faithfully ported to PC and Linux with the help of Tim Ambrogi of Final Form Games, developer of neo-classical top-down shooter Jamestown. (If you haven't tried Jamestown's 4 Player Co-Op Mode yet, I encourage you to pick it up!)

The Android version has been developed in collaboration with Apportable, the team who brought Osmos from iOS to Android. It supports both phones and tablets and is available on the Google Play Store as well.

The Humble Bundle also includes a key for the upcoming Steam version of Spirits that supports Steam Play, Steam Achievements and syncing via Steam Cloud. We also threw in a bonus Art Pack including sketches from the development and a digital poster featuring all levels. Spirits is coming to Steam regularly shortly after the Humble Bundle campaign is over.

As topping on the ice, all versions of Spirits (including iOS!) now come with new, challenging levels by long-time #1 ranked player and award-winning game designer Mads Johansen. We ran into him by chance at the Nordic Game Jam in Copenhagen, and he showed us how to solve levels in a way we never thought was possible. Bonus tip from him: "Using the pause-feature is half the game."

To round this off we asked Kert Gartner to make a beautiful new trailer for Spirits. Enjoy.